The technology of transportation is in the midst of a revolution. From route planning to on-demand ride services and everything in between, technological advances are giving rise to a suite of new tools that can help increase transportation access and improve mobility.

One of these emerging tools is “microtransit.” Microtransit a privately or publicly operated, technology-enabled transit service that typically uses multi-passenger/pooled shuttles and vans to provide on-demand and fixed-schedule services with either dynamic or fixed routing (SEA International, 2018; Cohen & Shaheen, 2016).

Communities are exploring new microtransit pilots to increase mobility in ways that could be more efficient and convenient for riders.

Unlike a standard bus, microtransit vehicles receive real-time requests, and use navigation technology to update routes based on traffic conditions and passenger destinations. Microtransit seeks to generate the most efficient shared trips possible and increase coverage without sacrificing frequency, accessibility or affordability.

The advantages of microtransit

Microtransit can be useful to public transit agencies in a number of different ways, such as replacing existing underperforming bus routes, particularly in lower-density neighborhoods, without sacrificing overall service coverage.

It can also act as a first- and last-mile system, enabling riders to make better use of other high-capacity transit networks around them.

The flexibility of microtransit allows the service to both relieve stress from crowded routes during peak hours and provide efficient demand-responsive late-night service during less-busy hours.

It’s also important to note that microtransit can be a cost-effective solution for public agencies to provide paratransit service.

How cities can get involved

Public agencies across the nation are beginning to pursue public-private partnerships with microtransit companies to achieve the region’s transit goals to expand coverage or increase efficiency.

In 2016, the Kansas City Area Transportation Authority launched the first private-public partnership between a major U.S. transit authority, an automaker (Ford) and an urban technology company (Bridj, which ceased operations in 2017).

In some cases, microtransit providers are also operating completely independent of the public sector (beyond its initial regulating authority). Jurisdictions can choose to regulate private microtransit services to achieve safety and social equity goals.

The City of West Sacramento is currently in the midst of a year-long public-private pilot project with microtransit operator Via. Leveraging $600,000 in Transportation Development Act funds, a $150,000 grant from the Sacramento Area Council of Governments and $90,000 in expected fare revenues, the pilot provides door-to-door on-demand service anywhere within the 23 square miles of West Sacramento for a fixed price of $3.50 per trip.

So far, the ridership has surpassed Via’s prelaunch expectations by nearly 50%, nearing an average of 325 rides per day since its launch. 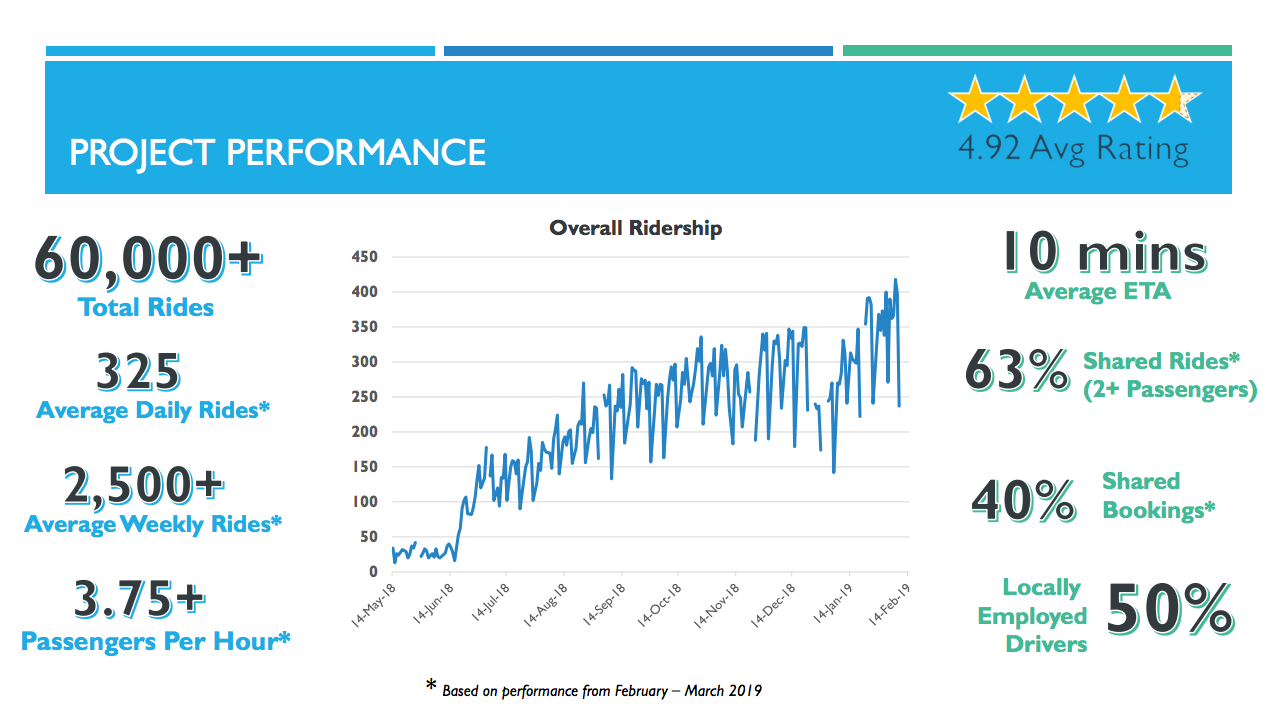 Six months into the pilot, the City conducted a survey to learn more about who’s using the service, why they are using it, and how the pilot is influencing mode shift.

The survey found that the people riding the most are:

Younger riders are mostly commuting to school or work, while older riders are using microtransit to get to medical appointments and the grocery store, and social or recreational trips. Lower-income residents are using the service primarily for commuting and grocery shopping.

The survey also asked about mode shift, “If you had not used rideshare, which other transportation options would you have used instead?”

Results showed microtransit is mostly replacing Uber/Lyft trips (49%), driving alone (34%), or getting a ride from a family member (34%). It’s also opening up new opportunities for some community members, with 14% of survey respondents saying before microtransit, they would not take the given trip at all.

Perhaps most importantly, satisfaction and quality of life improved greatly for West Sacramento residents, with 66% of respondents feeling safer, 41% of the survey respondents enjoying improved access to health foods and medical care, and 77% feeling more satisfied with the city’s transportation system.

In 2018, the Sacramento Regional Transit District launched SmaRT Ride in Citrus Heights to help provide convenient and affordable on-demand service and a new source of independence for those who would otherwise not take public transit. The service relies on small, neighborhood-friendly shuttle buses to easily maneuver on residential streets.

To date, SacRT has provided more than 130,000 SmaRT Ride trips and improved mobility access in Sacramento neighborhoods. The program’s success was recognized by the Sacramento Transportation Authority, which has awarded SacRT a $12 million grant to launch nine additional zones in disadvantaged communities over the next two years.

SmaRT Ride has garnered interest from transit agencies all over the country. SmaRT ride has received multiple national recognitions including the Innovative Solutions Award from Metro Magazine.

AC Transit Flex was designed to operate in two zones: one zone would fully replace the lowest performing route in the district, and the other zone would complement two existing bus lines. 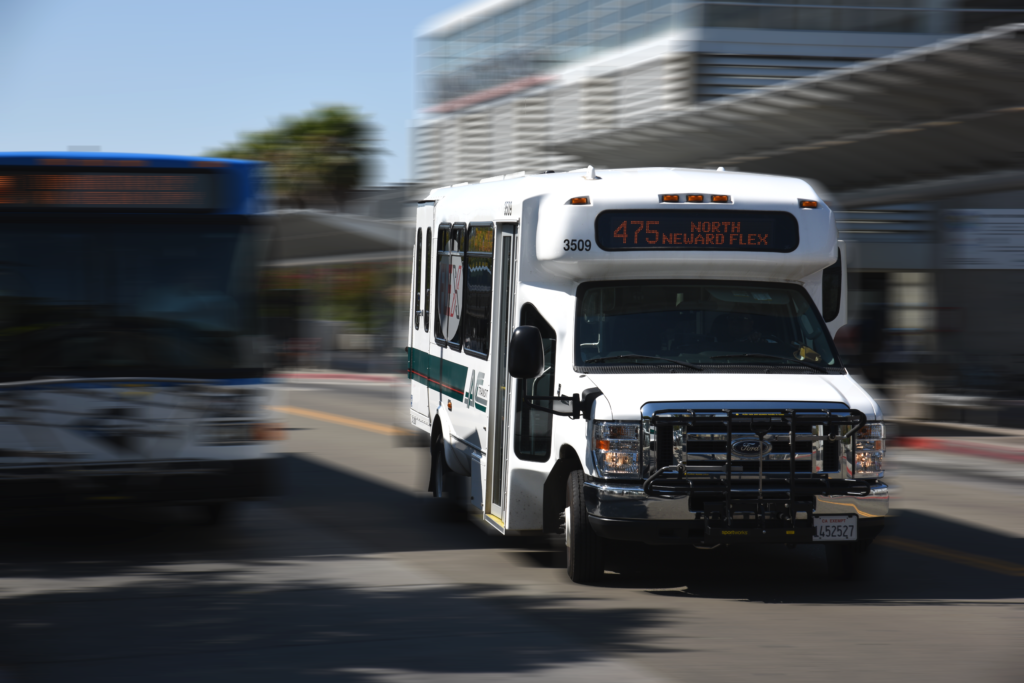 The pilot was designed to be cost-neutral, with the lower cost of smaller microtransit vehicles compensating for the higher cost of the on-demand service technology.

By 2017, the program had mixed success, with 700 users and 23,000 trips in one year. Riders liked the new service, with 94% of them preferring the Flex route over the traditional route. However, AC Transit’s per-rider cost was significantly more expensive on the Flex route than the fixed route ($72 vs $25 per passenger).

They determined the flex service is most appropriate when existing ridership is less than 7 passengers per revenue hour. In the future, AC Transit sees the possibility that fixed routes could see two to four times as much ridership when complimented by an expanded flex program.

Microtransit has the potential to provide a more efficient and convenient mobility option that can support local environmental, social equity and economic development goals. Implementing a microtransit program, however, can be difficult, and public agencies will face the same challenges that come along with the emergence and adoption of any new technology.

It’s important for public agencies to look at existing case studies, successes and lessons learned to help determine if microtransit makes sense for their community – and where and how it can best complement and improve the existing transportation network.

As public awareness grows, microtransit can become an increasingly viable tool that leverages technological advances to get the most out of our transportation investments.

Stay tuned for a new toolkit forthcoming, authored by the UC Berkeley Transportation Sustainability Research Center in partnership with the Local Government Commission on Microtransit and many other shared mobility topics.