“Plastics, in all forms – straws, bottles, packaging, bags, etc. – are all choking our planet. We must find ways to reduce and eventually eliminate single-use plastic products.”  – Governor Jerry Brown

Californians use – and then toss – a massive amount of paper and plastic packaging material every day: takeout coffee cups and lids, cereal boxes, wine bottles, plastic bags, clamshell food containers, and on and on.

People who are disturbed by all the trash they produce have been able to assuage their conscience a bit by making sure every potential recyclable item they use ended up in the blue recycling bin.

But the truth behind the recycling curtain is becoming harder to ignore now that the foreign market for America’s trash is collapsing.

The shrinking market for expanding recyclables

Until recently, China was the single largest market for the world’s recyclables. About two-thirds of the yogurt cups, soda bottles and magazines tucked into curbside recycling bins and crushed into bales were loaded onto cargo ships bound for China and other countries, where they were remanufactured into new products and shipped back to the U.S.

After 25 years, China refused to buy any recyclable plastic scrap that wasn’t 99.5% pure – a move that upended a $200 billion global recycling industry with profound consequences across the globe.

China officials announced, in 2017, that they no longer wanted to import the world’s trash, especially the plastic kind. Then, this May, China temporarily shut down all imports of recyclable material and warned that it would impose tough, permanent restrictions by the end of the year.

While Vietnam, Indonesia and some other countries still buy recyclable materials, there’s no alternative market on the scale of China.

Meanwhile, bales of mixed paper (cereal boxes, junk mail and the like) and plastics are piling up in warehouses up and down the state. If a buyer can’t be found soon, those bales will probably have to be taken to landfills to make room for the next wave of paper and plastic because the U.S. doesn’t have the remanufacturing facilities to process it here. 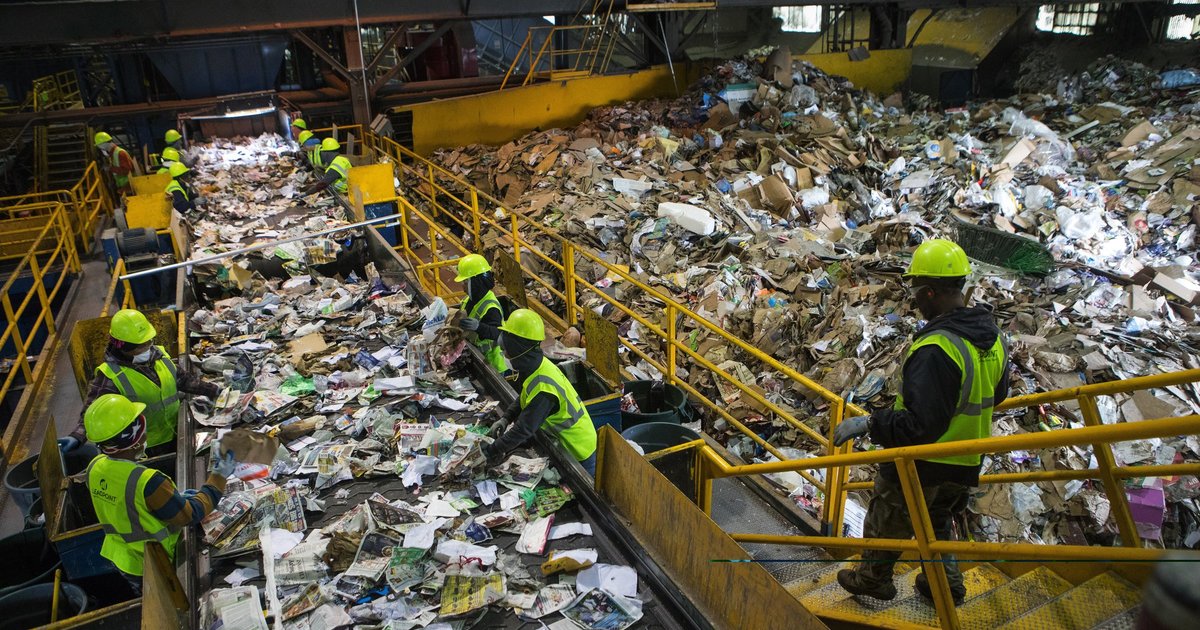 The accumulation of plastic in the oceans has worsened, as two trends reveal a bleak picture of the future of waste. The World Bank forecasts that the planet’s growing heap of trash collectively will grow by 70% within 30 years. Also, the astonishing growth of plastics production – half of the 7,800 million tons ever produced has been made since 2004, with 40% of it disposable – is outpacing almost all other manufactured materials as well as the ability of developing nations to deal with it. In other words, the garbage crisis is only going to get worse.

If the aluminum can is the world’s most perfect recyclable container, plastic is the opposite. Aluminum can be recycled innumerable times to make new aluminum cans. Plastic can be recycled only a limited number of times, and is difficult to recycle. Each variety of plastic requires a different recycling process, and plastics are made from thousands of different formulas.

Even the seven most common types of plastic used in consumer manufacturing – the category is stamped on the bottom of the product with a number inside a triangle – are replete with inconsistent varieties of resin composition, color, transparency, weight, shape and size that complicate the processing and often rule out recycling.

For example, a #1 soda bottle has different melt properties than a #1 lettuce container, making the lettuce container a contaminant for the soda bottle. Colored soda bottles can’t be mixed with clear soda bottles. Yogurt containers can’t blend with milk jugs, even though both are white. Filmy cling wrap can be recycled in theory, but is too often contaminated by food. The limitations are too many to count.

Bioplastics are further confusing consumers and causing headaches for waste management facilities. Not only are compostable bioplastics erroneously thrown into recycling bins, they don’t compost as well as advertised. If too many bioplastics are mixed with food waste or yard waste the whole ”green“ bin can’t be composted, so it ends up in the landfill (read more here).

Even before this development, California’s recycling rate (the percentage of recyclable material that didn’t get tossed in landfills) was on the wane – down from a high of 50% in 2014 to 44% in 2016.

Recology, San Francisco’s employee-owned recycling company, was paying $300-$500 to ship a container of recycled plastic across the Pacific – a fraction of the $3,500-$4,000 price tag for transporting that same container across the United States to plastic processing plants mostly located in the South.

In Franklin, NH, residents still sort items into separate recycling bins and garbage cans, but the different materials all get hauled to the same incinerator. “We are currently disposing of all of it at the trash plant,” said Judie Milner, Franklin’s city manager, “because recycling costs are twice as high.”

Cities could once count on processing facilities to pay them for material, but now they’re being presented with hefty bills instead.

“China has been warning us for a decade that we need to clean up the recycling, but the industry did not heed the warning,” said Mitch Hedlund, executive director of Recycle Across America.

Trash haulers and other waste-management officials in California are talking about long-term approaches, such as building plants in the state to use recycled materials and putting pressure on manufacturers to share the financial responsibility for the cost of the waste that their products become after they’re used by consumers. They are also starting the conversation on stop-gap measures such as educating consumers to do a better job recycling.

For too long, consumers have taken what waste experts describe as a “wishful” approach to recycling. Everything they hope can be recycled – holiday lights, batteries, plastic bags, hoses, power cords – has been tossed into the blue bins, ruining the mix.

This time of the year, those Christmas lights, power cords and other long, stringy, unrecyclable items get tangled up in the gears at recycling plants, particularly those dealing with mixed, single-stream loads. That fouls up the machines, causing delays and driving up costs.

“If they’d had any questions in their minds about whether something is recyclable, they’ve been encouraged to put it in the bins,” said Sara Bixby of the Solid Waste Association of North America. “We have to stop that.”

Educating consumers can make a big difference in terms of how much they recycle, as well as whether they’re doing it the right way.

Recycle Across America is working with cities and corporations to encourage the use of standardized labels, so consumers will know exactly what’s recyclable. Once the public schools in Orlando, FL, started using these labels, they saved $370,000 a year in trash-hauling costs.

Educating consumers on recycling is important but the real long-term solution is to reduce our reliance on disposable items.

Local governments across the nation are doing just that. Three areas for action include:

Cities are striking out against styrofoam. New York City Mayor de Blasio announced a ban on single-service styrofoam items, including cups, bowls, plates, takeout containers, trays and packing peanuts. The ban goes into effect January 1, 2019. The City won a lawsuit after a restaurant union argued that the styrofoam could be recycled profitably; the City countered by saying there is no market for the recycled production.

There is a popular and growing movement to ban or heavily tax single-use plastic bags across the United States and globally. So far, 349 cities, counties and states are known to have, in some way, banned or taxed plastic-bag use, including a long list of California jurisdictions.

Reuse This Bag estimates that a plastic bag has a 12-minute lifespan from the moment it’s initially filled with groceries at the store to when it is discarded. Compare this with estimates that those same plastic bags take anywhere from 10 to 1,000 years to decompose, depending on the environmental conditions where the bag is discarded.

Americans discard approximately 500 million plastic straws every day, according to the National Park Service. The California Coastal Commission has reported picking up more than 835,000 discarded plastic straws between 1988 and 2014. Plastic straws can take 200 years to decompose.

While certain plastics can be recycled, the vast majority of single-use straws are sent to landfills. Similar to other single-use products, plastic straws are cheap to produce but also have low economic value to recyclers. As a result, they are more likely to be discarded rather than recycled, often ending up trashing our streets, littering beaches, or polluting oceans and waterways.

In May, the Oakland City Council approved an ordinance that prohibits the use of single-use plastic straws in Oakland’s dine-in restaurants, bars, cafés and other food facilities, except upon customer request, as part of its health and sanitation standards.

Oakland’s ordinance also includes a provision to expand its scope to include containers, utensils and other disposable food-service ware in the restrictions in addition to single-use straws.

A full list of cities with plastic straw bans can be found here.

The State of California banned single-use plastic grocery bags in 2016 (SB 270). Ocean Conservancy estimates that bags now make up around three percent of the trash in California’s beaches, down from 7.4 percent in 2010. This year the state passed a law this year that requires restaurants across California to offer straws only upon request (AB 1884).

Outside the U.S., India will abolish all single-use plastic by 2022, vows Prime Minister Narendra Modi. The United Kingdom government has laid out plans to ban the distribution and sale of plastic straws, stirrers, and cotton buds, to be enforced “at some point between October 2019 and October 2020.”

For decades, California has reduced the amount of waste reaching landfills and recaptured value from waste streams through recycling and composting. California law requires reducing, recycling or composting 75% of solid waste generated by 2020.

California communities should take ownership of their waste and adhere to a waste “loading order” that prioritizes waste reduction, re-use and material recovery over landfilling. Local governments can educate residents and pass local policies that encourage re-use and proper recycling and reduce the use of single-use containers.

The state can take steps to reduce waste from packaging, which constitutes about one-quarter of California’s waste stream, and invest in developing infrastructure to support recycling, remanufacturing, composting, anaerobic digestion and other beneficial uses of organic waste.

California’s current waste and recycling situation is a crisis, but it’s also an opportunity to enact meaningful policies to address waste more systematically.

Accelerating the Timeline for Climate Action